One of the things I’ve been very involved with in recent years is organising events that give people who usually interact online the chance to meet in person. In-person discussions provide a chance to hear multiple viewpoints and to delve into detailed arguments that aren’t easy to present online. These events also create an opportunity to extend the conversations to others who may not be part of the original online communities, allowing the communities to grow. (See also this post for other reasons why in-person events are valuable for online communities).

Below are some thoughts about different formats for discussion sessions with some comments about when they might be most useful, what things ensure that they work well, and potential pitfalls. I’ll cover more “hands-on” formats soon (e.g. workshops, hackdays, unconferences).

Please do add your own examples in the comments. Have you seen any of the formats used at a conference that you attended that were a big success?  Do you know of any good video examples to share? What other formats have I missed?

What is it? The idea behind this style is that a prominent person is made accessible to the audience so that they can ask any questions that they like. Adding an online element e.g. via Google+ hangouts expands the reach even further to additional pre-invited audiences located elsewhere.

Examples: The “Pioneers in Science” sessions at the World Science Festival. When I attended this version in 2013, Nora Volkow was invited to answer questions from high school students about her research career, being a woman in science and the societal implications of her work. As well as an in-person audience of students from different schools, Google+ hangouts were used to allow other international student groups to join in.

Suitable for: Allowing the audience to address a specific issue in a highly interactive manner with a single expert e.g. why an organisation has chosen to pursue a particular course of action or to quiz a mentor figure about their experiences. Might be good for dissecting a policy decision (with a strong moderator), such as open access, or funding updates.

Tips/Ideas: Needs a good moderator to keep the discussion flowing. They act as the time-keeper, field questions and decide when to move on from a particular topic and focus on another. Important that they’re comfortable with keeping potential conflicts under control if the topic is a contentious one.

Potential problems and other considerations: Need to ensure that there are enough questions – prep the audience beforehand via blog posts or ask for questions to be submitted e.g. via twitter so that the moderator has these on hand for any quiet periods. How to stop the session from turning into a badly-structured interview between the moderator and speaker? Perhaps the moderator can announce that the discussion will have an agenda in advance e.g. 4 different topics will be discussed and questions should fit into those or an AOB section at the end? Should the audience be able to discuss with each other or does every question and comment need to be routed through the person in the hot seat?

What is it? The idea behind this style is to have a more structured interview to discuss particular topics one-to-one with a prominent figure. There could be audience questions at the end, although the main focus should be on an entertaining/informative interview, possibly complemented by the opportunity to meet the speaker afterwards over coffee or in the bar.

Suitable for: A more personal and wide-ranging interview with a prominent figure, preferably to illuminate their experiences with “wit and wisdom” rather than solely push a product or organisation.

Tips/ideas: This needs careful planning and briefing of the interviewee so that they can prepare informative, engaging answers. There should be a good chemistry between the interviewer and interviewee – they may already know each other or the interviewer is a journalist or TV presenter with experience in teasing out an interesting dialogue. The interview may also be broken up by having sections of video where examples of the interviewee’s projects are shown in more detail. This can be useful for retaining audience interest, as well as providing additional context about the interviewee.

Potential problems and other considerations: Don’t let it run too long (45 mins or less), keep it on topic(s) without it appearing rigidly scripted, make it informative while keeping it lively and entertaining – try to alternate the pace and tone throughout e.g via video clips, short audience Q&A at the end, quick straw poll of the audience as to whether they agree or disagree etc.

What is it? This consists of 3 or 4 panelists, plus a moderator who is not part of the panel. Each panelist is introduced by the moderator and may get the chance to give a very short (couple of minutes) introduction about their area of expertise. The moderator then leads a discussion by asking questions of specific panelists and then folding in additional responses from other members of the panel. There may be time for audience questions at the end or questions could be submitted in advance.

Variants on this include: a) science salon – no audience Q&A, top scientists explain a topic to non-experts – as seen at the World Science Festival. b) Opening/closing plenary panel to discuss a big theme of a conference.

Examples: Alan Alda’s session on “Neuroscience and the Law” at the World Science Festival 2013 was excellent – he was a great moderator and had carefully crafted the flow of the panel to create two mini-panels with a short bit of re-jigging in the middle of the programme.

Tips/ideas:  Alda was effective because he played the “curious layman” – asking the kind of simple questions the audience might have wanted to ask, and using a bit of humour to keep things light. I’ve also seen sessions whether the moderator recounted a short summary of what had been discussed in the previous five minutes or so, using much simpler terminology than the experts. This helped to keep the audience following along with the complex theoretical arguments.

The session organiser should identify panelists who cover different angles of the topic to be discussed. Include people who are opposed to it or have encountered problems so that these can form part of the discussion. Consider what hasn’t been discussed before. Email potential questions/topics to discuss to the panelists beforehand and ask each panelist what 3 things they would like to raise as part of their contribution to the panel. Prepare a way to close the panel e.g. by asking for final thoughts from each panelist, taking a show of hands from the audience, providing a quick recap of the entire conversation.

Potential problems and other considerations: Everyone on the panel agrees and the debate becomes stagnant, or the moderator just asks questions back and forth without there being any interaction between the panelists. It appears too staged. The audience feels bored, that their views are not represented by any of the panelists or that they cannot follow the conversations because they are too technical or too unstructured.

What is it? A variant on the panel discussion which is intended to be much more interactive and less “top-down” between the panel and the audience. Panelists are limited to 5 mins or so to present a case study, opinion or new tool, preferably without slides. After all presenters have spoken, the attendees can choose to take the conversation in whatever direction they’re interested in (with facilitation by the moderator).

Examples:  SpotOn NYC (SoNYC) monthly events that I co-organised have used this format.

Tips/ideas: The session organiser needs to brief the panelists in advance about what to expect and remind them to come prepared for a more collaborative experience. By de-emphasising slides and encouraging more natural dialogue, the idea is to prompt more conversational events. 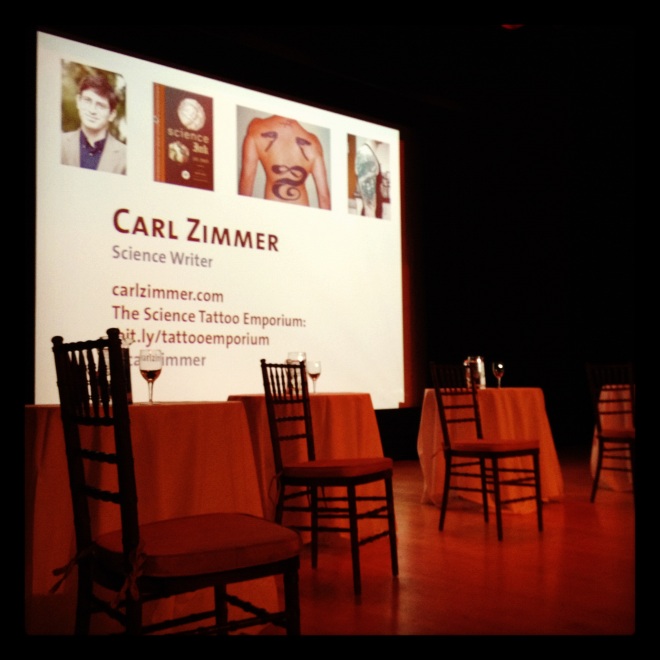 Preparation is vital before your panel discussion. Image credit: author’s own.

Potential problems and other considerations: Good moderation ensures the flow of conversation, which may be between attendees and not always directed through the presenters. Moderation also helps to ensure that no one opinion dominates the discussion. One of the criticisms that I’ve heard of this format in recent months is that by focusing on a participatory, less structured format the emphasis can tend towards recapping past progress rather than moving towards future actions. Moderation and some advance planning of key points to cover may help to address this.

What is it? Speakers have a limited amount of time to give a very short presentation (e.g. Pecha Kucha is typically 20 slides with 20 seconds per slide) or demo followed by 5 minutes of questions afterwards. The aim is to give an introduction to a topic or to showcase a range of different products in a short space of time and then allow time for follow up discussions afterwards over a buffet lunch or in the bar.

Tips/ideas: Make sure all speakers clearly understand the time constraints and don’t be afraid to enforce them. For example, if slides are received in advance, they can be auto-timed to only show for 20 seconds each, enforcing the Pecha Kucha format. It goes without saying that for this particular format it’s important to get the tech set-up right in advance to avoid delays!

Potential problems and other considerations: It helps if there’s an overarching theme to the event so that all the talks or demos are clustered around a particular topic. Insistence on good time-keeping also keeps any one talk from turning into an extended product pitch: the emphasis is on overview, not detailed feature explanations.

What is it? I’ve never actually seen this at a conference, but it’s something that’s formed part of debating society events. The panelists are imagined to be flying in a hot air balloon which is sinking. One panelist at a time must be discarded, based on audience voting.

Propose a motion for debate e.g. “Creationism should not be taught in schools” and assemble a panel of people, each with a slightly different take on the topic e.g. a teacher, a parent, an education policy professional, a creationist. In round one, each person states their case in such a way that they are appealing for the audience to agree with their point of view. The audience then votes on who to discard from the balloon. Repeat for another couple of rounds allowing each speaker to respond to what their co-speakers said in the previous round. The idea is to keep speeches very short and to get into a more detailed debate as each round passes.

Suitable for: Never seen this done at a conference but tempted to try it for something a bit different, and more entertaining at the end of the day. Good for energising the audience around an issue? May also be useful for encouraging communicators to practice presenting different viewpoints and in less formal styles.

Tips/Ideas: Have a moderator who can introduce layers of complexity into each round so that the debate progresses. Choose charismatic speakers who can argue a viewpoint, perhaps in a style that exaggerates their own point of view to highlight the arguments that might be encountered elsewhere.

Potential problems: Need to carefully select the topic and the participants and keep the number of presenters low enough that the debate doesn’t stagnate over multiple rounds.

4 thoughts on “All together now: Event formats for discussions”

Still not found what you’re looking for?

Blast from the past – the archives

A little birdie told me…